Voulez-Vous is a classicly trained Jazz guitar player that thought, in his mind, it takes absolutely no talent to play that style of guitar. So, he turned his talents to Rock where, in his mind, he can play a million miles an hour, a lot louder and with a lot more style. Voulez-Vous is originally from France, born sometime in the 60's the oldest of 5 kids with four sisters. Oh my did he have his hands full . In high school he enjoyed playing soccer AKA (Football) and playing in the Jazz band. But after too many red cards and own goals the coach finally had enough and cut him from the team. With the Jazz band after taking every guitar solo and playing them at the speed of Eddie Van Halen the band director dismissed him. Still with his love for soccer found himself a full time job with France's National soccer team AKA (Football Team) as a towel boy. With music still his first love and inspired by Jim Morrison being laid to rest near his home town he started a Door's cover band called Light My Fire in the late 80's with his buddy Cassidy being Jim. After a few years of that, Cass took off back to his native California getting a new act rolling Called Re-Wind "That 80's Band". After a few years playing with  Re-Wind guitar player Blackie Staxxx became more and more unruly.  Voulez-vous received a call from his buddy Cassidy about Joining the band. He moved his family to the United States and became the guitar player for Re-Wind. Knowing that there was no way to completely support his family on a Re-Wind salary and his love for soccer , with his experience as a towel boy he is now the current towel boy for the San Jose Earthquakes. 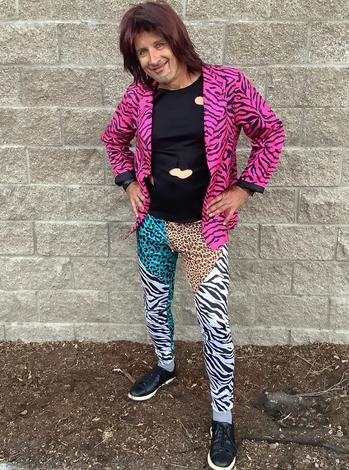